What It Means To Be An Indians Fan 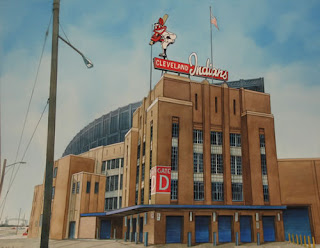 As a Cleveland fan, you get asked the question, 'Why?" a lot. And by a lot, I mean by every person you meet not from Cleveland will ask. Everyone will have a different answer for the question depending on how old they are and what sport they love the most. A common theme however, isn't winning. Very few fans remember when Cleveland had a winning franchise. The common thread is what surrounds the actual games.

A great tailgate with friends sometimes becomes more important than the game, especially when the team is losing. As much as I love all the teams, the Indians always have had a special place for me. I didn't go to my first Browns game until college. I remember going to a few Cavs games at Richfield Coliseum, mainly to cheer for my favorite player, Bingo Smith. The Indians though, they were a different story.
I have wonderful memories of holding my dad's hand walking down the street to the old stadium, chattering away happily about whatever I was into at the time. If you think Progressive Field looks empty at times, you have never seen the cavern known as Municipal Stadium. One of my favorite things to do was to run up and down the giant stairs, barreling down each row and section to find the perfect seat. I was convinced we had to sit in "our"seats, and my dad told me to look at the seat number only. I would spend half an hour looking for the perfect seat 5.

I won my first ten-speed bike at an Indians game. It was powder blue, rainbows and the ever fashionable denim seat. Sadly, I was 5, so my uncle took it. Completely random comment I know, but I had to share. I don't think kids even ride bikes anymore, let alone a ten-speed.

Every game my dad took me to was treasured quality time. He would show me how to keep score in the program with a stubby little pencil. We would chat about my love of Joe Charboneau and how I wanted to be the first tom-tom girl. Keep in mind kids, this was before everyone was on the web. There were no cell phones, instagram, facebook, twitter or text messages. That in mind, I thought John Adams worked for the Indians and he had the best job on the planet. I had no idea he was a super fan. Usually after the first hot dog I would deluge my dad with questions on how the drummer guy got such an awesome gig. I would then ask if my dad thought I could do it...being the first girl at it and all.

He always told me yes. I could do anything I wanted he would tell me. Then, I would run off and take a nap on top of the dugout. Yes, I actually did that. It was against the Blue Jays.

As an adult, even though I lived states away, I would always make it home to go to a few games with my dad. Some things have changed. Now, I pay. We only eat one hot dog now instead of having a contest. There is no more finding the perfect seat (ok, I still do that, but now I wait until the 3rd inning. You snooze, you lose). But the most important thing that hasn't changed is the quality time I spend with my pop.

Cleveland sports are more than a schedule of games. The teams are intertwined with our lives as Clevelanders. Let's embrace them for everything they give outside of the win/loss column. I know I do.

Two days until I leave for Indians Spring Training...not that I am counting...

Posted by Cleveland Chick at 1:35 PM