My Week With A Chevy Cruze

I was approached by Chevy to test drive a few of their cars for a week each and then share my opinion. My current car is a 2003 Saturn Ion 3, which is the first car that I have owned with power windows. So, I of course took Chevy up on their offer.

I picked up my Cruze at Lavery Chevrolet in Alliance was surprised at how roomy the Lordstown's own Cruze looked for a compact car. 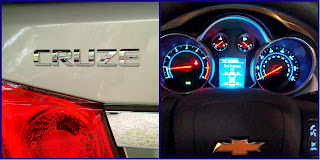 The Cruze was the economical next choice after the Equinox.  Don't mistake me, the Equinox was a great ride, but the elation pooped out when I hit the gas tank.


MyLink works with your compatible smartphone and Bluetooth® wireless technology to stream content to its 7" diagonal high-resolution color-touch screen. Through voice commands or touch controls, tune into Pandora® or Stitcher SmartRadio™or listen to commercial-free programs through the three-month trial of SiriusXM Satellite Radio. You can also connect your music-loaded flash drive or MP3 player through the USB port†. Gracenote® will even organize your music library by populating song information and album art.

The ease of making a call through the system after linking my smartphone up via Bluetooth was a ticketsaver. Many communities (including Beachwood, which I have to frequently zoom through) will happily write you a ticket if they see you fiddling around on your phone making a call.

I can't get over how technology has changed the driving experience. Between the MyLink, Bluetooth, XM radio, and the ability to check the air in the tires from the driver's seat, it was a pretty sweet ride.

Another crazy feature that the Cruze has that I did *not* try (because I am admittedly a chicken) was the Driver Shift Control. Get this...with the available 6-speed automatic, with a quick tap, you can switch from automatic to high-performance manual operation.  Whoa.

The Cruze Eco gets 42 MPG on the highway, the most of any gas powered engine in America and is packed to the gills with safety features from TEN airbags (yes, ten), anti-lock brakes, Side Blind Zone Alert, Rear Cross Traffic Alert and OnStar.

So what did I not like about the Cruze?

The Chevy Cruze was a bit small for me. It isn't Chevy Spark small, but it is smaller than I am used to. It was easy to buzz through traffic and to parallel park (important features in my mind), but as a general rule, I like a little more car.

I give the Cruze an A and while it isn't on my list of options when my Saturn dies I can endorse it for you. Like I typed, it is the car's size that took it off my list.

Disclosure: Chevy gave me a shiny new Cruze to drive for a week and share my opinion with you all.  My words are all mine. Also, thank you to Lavery Chevrolet in Alliance. They have been super nice during my car hopping.

Posted by Cleveland Chick at 7:00 PM