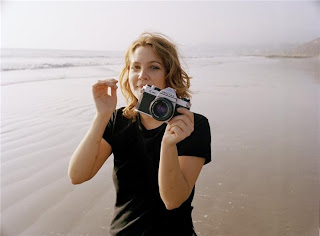 Welcome back to a semi-regular feature here at the Pierogi - Photo Fun. I dig through my digital archives and post a photo that I snapped years ago, but for one reason or another, it resonates with me.

If you have ever met me in person, you will quickly find out I am one for stories. I love listening to them and I love telling them. Something usually simple and mundane for someone else holds a special allure for me. In case you haven't noticed, what is average and matter of fact for one person, is something completely different for someone else. 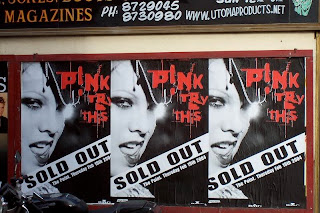 I took this picture hanging out the window of a bus somewhere in County Cork, Ireland.  I was incredibly excited because I was going to see P!nk during my trip to Dublin. This trip was important and memorable to me for many reasons. The trip was particularly important because it was the first time I traveled to a foreign country on my own...and it was in the middle of the US hitting Afghanistan.

When I landed at the Dublin Airport, I was greeted with people caring signs scrawled with "Why are we USA's whore" and the like. I had no idea, and most Americans at the time didn't either, the US was using the airport in Shannon, Ireland to refuel before continuing on and the Irish were less than happy.

When I got to my hotel I was scared out of my wits. I was tired. I needed a shower. I was hungry. And I was afraid. I turned on the TV and there were massive marches in London and Dublin protesting the engagement. They expected 10,000 people in Dublin for their march and 100,000 showed up.

I stayed in my room, laying low like the US Government recommends you do until I couldn't take it anymore.  I wandered down to the pub on the corner, Murphy's, to get a bite to eat and then I planned sneaking back to the hotel and crashing. I vividly remember standing at the bar, trying to be as un-American looking as I possibly could to avoid an ass kicking. I quietly ordered food and a pint of Guinness. Then looking around and feeling relatively safe, I ordered another pint of Guinness.  Service is not exactly speedy in Irish pubs.

An older gentlemen came up to me and shouted, "SO WHAT PART OF AMERICA ARE YOU FROM?"  My immediate reaction was to focus and keep from wetting myself.

His name was Paddy (no, I'm not making that up) and he kept trying to get me to join him and his group of friends. His group was a mixture of young and old and appeared like an interesting display of class and seemed friendly enough. But I politely declined. I wanted to eat my sandwich and bolt.

As I mentioned, service is less than quick in Irish pubs. Unlike America, no one was in any hurry.  I ordered another pint and my internal dialogue flowing through my brain was getting the best of me.  Paddy and his group were seated by the door and as I chomped down the last bite of my ham and cheese sandwich, staring intently at the group, sizing them up, I decided if things got ugly, I could outrun most of them.

My tummy full of sandwich and Guinness, I tentatively approached my new friend Paddy. Turns out that his group was comprised of reporters from all over Ireland, a few Scots and several academic types from Trinity College.

The group welcomed me in and we had a wonderful time chatting into the night. As the nerd that I am, I read several book about Irish culture before my trip, with one article stuck with me saying if you make friends with some Irish blokes, and they include you in the rounds of drinks you are in. And...at some point it will be your turn.

Things get a little hazy at this point.

No sleep, lots of stress, little food and lots of Guinness and a wee bit o' Jameson. I remember feeling very warm and extremely happy when I noticed that everyone's glasses were close to empty. I stood up, swaying a bit, and announced I was getting a drink, and I wanted to know everyone's orders.


A mid-level professional type shooed me off, slurring, that I was a guest in their fine country and they would have none of it. My response was my best Superman pose - hands on hips and all - and announcing that I was not going to have everyone call me the bloody American when I left.

There was a split second, looking around at their faces, that I was afraid I offended my new friends and my second thought was wondering if my shoes were tied tight enough to outrun them. My fear evaporated when they errupted into cheers that would rival Browns Stadium after a sack on Roethlisberger.

When that pub closed, we all ended up in some all night Chinese restaurant in downtown Dublin (there are few all night places) that I ate an ice cream sundae at.  I don't know...it had those little vanilla creme wafer cookies on it and I was hooked. I stumbled back to my hotel around 6:30 am only to have the hotel owner call my room at 7 am to check on me. She was worried that I was an American traveling alone and wanted to make sure I was ok.

The next night, I saw Pink at The Point in Dublin and it was an *amazing* show. It was amazing for gobs of reasons. First, this was 2004, so I only really knew of her from radio and video. This girl has a set of pipes on her *and* she is a fantastical performer. Standing in the audience, it was shocking to me that the crowd knew every single word to every single P!nk song. And then P!nk sang Bobbie McGee and I might have been one of 4 people that knew the words.

After the show, I went back to Temple Bar and chatted with other P!nk fans and between sips of Guinness and a bunch of rowdies screaming Who The F*ck is Alice, I got schooled. I have always taken for granted that I can see my favorite artist. If they don't come to Cleveland, I can drive to Indianapolis, Chicago, wherever without much trouble. Imagine if your favorite band never toured to your country.

Crazy to think about.

After typing this all out, I really want to see P!nk again.

Who is going to see her at the Q in Cleveland?
Posted by Cleveland Chick at 3:29 PM