Orange is the New Black - Worth the Price of Netflix


Every season, there are new television programs that are called critically acclaimed. These shows are tagged with lines like "Must See!" and my personal favorite, "The best program you aren't watching!" Whenever I hear a critic say that, I immediately think of it being a snoozefest and flick on Big Bang Theory.

Orange is the New Black was different.

It came out in July and I don't recall seeing anything about it. I heard about it on social media and from friends. When a friend tells me something is a must see, I will give it a look. It is also different because it is a Netflix original series, that they release by the season.

Orange is the New Black, is based on the best-selling novel of the same name, by Piper Kerman. The novel chronicles her time spent in a minimum women's prison. Kerman was sentenced for transporting drug money.

Here is a description of the series from Deadline.com:

The show is fantastic.

I will go so far as to call it brilliant. The only other programs I would put in that category would be The Sopranos, Fringe, X-Files and the early days of ER. The story telling is compelling in a thoughtful, dramady (that would be drama/comedy) fashion. As the series progresses, the viewer is taken into the world of each character, building on their background story. In the first season, you see *most* of the end stories for the characters - how they landed in prison (I personally am waiting to see Kate Mulgrew's tale).  Each episode you are hoping for a little more, and a little more.

Netflix has done something amazing here. This program, is based on well written stories, led by a predominantly female cast of little knowns. Sure, some of the women have had great success, but when was the last time you saw Captain Janeway in anything quality?

There aren't enough positive words I can throw at you to get you to watch. I suggest signing up for the free trial of Netflix and give it a watch.

You won't be disappointed.

If you have made it through the whole series, please join me in nodding at the picture below: 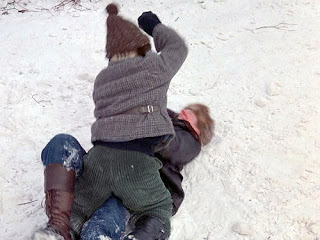 Posted by Cleveland Chick at 5:30 PM