Pierogi Book Club - Sum It Up

I determine what to read next based on recommendations of friends or interesting snippets online. For this latest book, I was looking for something smart, uplifting and maybe a little sporty. Most people came back with Sheryl Sandberg's Lean In: Women, Work and the Will to Lead.  It is still on my list, but I can't tell you how glad I am that I went with Pat Summitt's Sum It Up: 1,098 Victories, a Couple of Irrelevant Losses and a Life in Perspective instead.

If you have never heard of Pat Summitt, she is the Coach Emeritus of the University of Tennessee's Women's Basketball program. She is the all-time winningest coach in NCAA basketball history - winning more games than any other men's or women's coach. In 38 years, she never had a losing season.

I wish she coached football.

Her accolades could take a dozen blog posts to dissect. That was reason enough to read her book. But I had more personal reasons to read it.

In the mid-90s I worked at East Tennessee State University and got my first taste of living in the South. Let me tell you something, unless you lived in the South during college football season, you have no idea what you are missing. College sports are a religion down there. They make our tailgating efforts up North look like little kids making peanut butter and jelly sandwiches in the back yard. During that time, a guy played for UT that you might have heard of - one Mr. Peyton Manning was their quarterback.  Rocky Top was constantly on the radio.  And my secretary, bless her heart, was horrified when I mentioned I had never heard of Pat Summitt.

She sat my Yankee butt down and told me stories of Summitt's icy stare that would scare the scent of losing out of the gym. She told me how Summitt went on a recruiting trip while very pregnant, and her water broke while she was still in Virginia. Summitt swore that no child of hers would ever be born in Virginia and she chartered a helicopter to make it across state lines. That wasn't *exactly* correct (Summitt's water broke while on a recruiting trip, which she went through with, and she was in the UT private plane, not a commando operation), but you could imagine my wonder how a woman like this could exist while not wearing a cape.

In 2011, Summitt announced that she had early onset Alzheimer's and took a step down from full-time coaching of the team program that she built. I wanted to see how the toughest bird on the planet handled such a diagnosis. I remember watching the news unfold on TV and trying to grasp how Summitt would handle it. 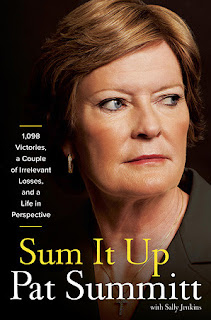 Summitt grew up in a time that girls didn't play real basketball. Girls teams played half court if they were lucky. There were no uniforms. There was no Title IX.  Even though she came from an incredibly humble background, her dad, a tough man that showed little emotion, moved the family so she could go to a high school that had a girls team.

While Pat Summitt was one of the best high school players in the nation, she was so shy in her first days at UT, that when she introduced herself as Patricia and everyone called her Pat, she never corrected them. Her preference was Tricia.

The key to making Sum It Up enjoyable was all of the quotes from family and Lady Vols, giving more background and adding to Summitt's stories. Her   honest recollections of sideline talks (or yells) offered a glimpse into a growing leader. She acknowledges that she had to change her coaching style if she wanted to keep anyone on her team. She was all tough no love morphing into tough and a little love.

One of the quotes from past player Becky Clark, who is now deaf, is that she can still hear Pat in her head, "Anticipate."  Summitt made sure that 100% of her players graduated.  She lead one of the mightiest programs in the country with dignity and class.

It was heart wrenching and I may or may not have sniffled a little, to read the first page of each chapter. Summitt's co-author, Sally Jenkins asks Pat questions and chronicles her feelings pre/post Alzheimer's diagnosis. By the end of the book, you can see the disease starting to take hold, Summitt needing little prompts to recall a game or player.

One thing is for sure, if there is anyone out there that can give this disease a run, it is Pat Summitt.

If you are a fan of sports, know someone wrestling with Alzheimer's or if you just want to read a book to learn about one of the most no excuses people on the planet, check out Sum It Up.

Posted by Cleveland Chick at 4:00 PM