Adventure comes from unexpected places and sometimes you need to tell yourself, "buckle up buttercup" and hold on for the ride.

Last night, I had the big idea to go down to the Jake to welcome my beloved Tribe home.  I've been waiting for the postseason since Spring Training. I saw it back in March - this team is special. What better way to recognize their awesomeness than to tell them in person?

Through the powers of social media, I had an rough idea what time the team was landing in Cleveland, so I picked out the perfect welcome home shirt (Windians), stopped for a coffee and zooooom... I was off to the Jake.

I drove by the player's lot and there were about 6 cars in it. Rhut rho. I tried not to panic. It was still early, but it didn't seem right. After a quick interwebz search, my google fu pointed me to Burke Lakefront Airport.

I weaved my way through the Muni lot, passing the last tailgaters and clean up crews, parking by the terminal entrance.  Word shot through Twitter that the team was flying in to Hopkins.

Zooooooom...off to Hopkins.  I made it to Hopkins in more than enough time, finding friends along the way and waited outside of the security area. There were about a dozen fans wandering the airport, but I thought for sure we had it figured out. That was until a man came by and asked if we were waiting for the team.

He had to break the news to us that we were in the wrong spot and he pointed out the window where we had to go.

We sprinted through the terminal and the garage (picking up more new friends along the way), at one point I thought I was going to throw up. I really need to work out more. But we piled in and off we went.

Zooooommmm...off to...I have no idea. We zigged and zagged through the IX center parking maze and just as we parked, the Indians were walking out of the hanger.

It was rainy and most of my pictures came out fuzzy, but the crowd of 40 or so cheered as each player drove by. No one stopped to shake hands or sign autographs, but Swisher did roll down his window and cheer back.

All in all, it wasn't so bad of a way to spend an evening. I got to meet some new kids and let's face it, it is October and the Tribe is still playing.

We did it. Let's see how far we can ride this crazy train of fun. 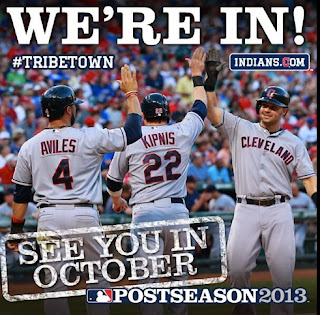 Posted by Cleveland Chick at 10:16 PM