My favorite time of year is almost here...Browns football season.

The cool mornings, the sound of grown adults barking in the distance. Ahhh...

Cleveland is a special place during football season, with a fan base like no other.


We love the Browns and the game of football. I defy you to find another city where men, women, children, old folks and toddlers can tell you anything you want to know about the game. Where else can a little phrase like "The Fumble" bring a grown man to tears and the name "John Elway" make a sweet little grandma chuck her purse to the ground in disgust?

Browns football has been bringing the city together for generations.  Win or lose, on Sundays, we are all doing the same thing...watching our team, sitting on the edge of a bar stool or couch cushion, praying for the catch.

People have asked me how I came to be Cleveland Chick. The answer is easy enough. It is because that was my name in Indianapolis. I was/am so well known that when I walk into certain establishments, there are whispers of "There is that Cleveland chick, put the Cleveland game on."

When I lived in Indianapolis, I worked part-time as a bartender at Colts games. My uniform was a ref shirt, but on my way out, I always had on my Browns hat, scarf and gloves.  Each game, I had to walk by the opposing locker room, deep inside of Lucas Oil Stadium during the fourth quarter. All of the media types would be lined up in the hallway, waiting and watching a scratchy old tv, for the game to end. After one game, on my way to check out, I had one of the NFL Network guys throw a serious smack line to me about the Browns. "Seriously? You are a Browns fan? Meh." My response? I stopped in my tracks, looked him dead in the eye and with the deepest, loudest voice I could muster, the chant we all know and love tumbled out of my mouth, " HERE WE GO BROWNIES HERE WE GO WOOF WOOF!"

Next Colts home game, I walked down that same hallway, passing the same media types, but this time I was greeted with "Hey Cleveland, looks like your boys are up"  Every game, every season from then on out, all I had to do was say "What's the score?" and I always got the Browns score. There was never another question about what game I was talking about or about my fandom.

It has been awhile since we all had Browns on the brain, so here are a few clues you can use check if you are a real Browns fan:

You have never worked on a farm or a construction site, but you own or are considering buying Carhartts for the tailgating and game season.

You have a hard time getting your hiney to work on time but you can get up before the sun to make it to the Muni lot before it opens.

You have no yellow hand towels in your house.

You have named your pet or child Bernie.


You have strong feelings about certain teams.


But, you can support another team if it is good for the Browns.

You know the words to this song. 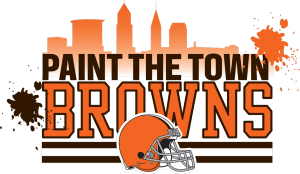 The Browns are as excited as the fans this year with a fan engagement campaign to Paint the Town Browns! They want to thank the fans for their lifelong, dedicated support and to show the rest of the country why the home-field advantage lives in Cleveland! Leading up to the opening game, the Browns will have a week-long series of events and giveaways!

Each day, there will be a new activity posted on Paint The Town Browns. Check the site daily for awesome events and tell the world how awesome we are with the hashtag #WeAreCleveland.

In addition to all this fun, I am giving away a pair of Browns tickets to the Browns v. Jaguars game on December 1.

You have until Saturday, September 7 at noon to enter. Remember, you can tweet once per day. Let's face it, if you tweet more than that, people will want to hurt both of us. 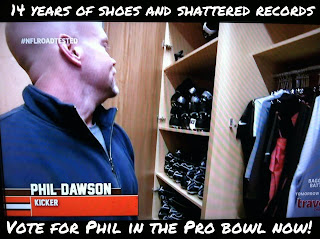 Disclaimer: The Browns asked me to help promote the spirit week and gave me a pair of tickets to giveaway in return for some swaggage. The words are my own, because do you really think that the Browns would condone me barking at the NFL Network?

Posted by Cleveland Chick at 3:26 PM