Today's Photo Fun is from an event that I attended a year or so ago at Cleveland State University. Besides the faculty advisor, I am confident I was the oldest person in that auditorium, and it was worth every minute.

One of my favorite blogs/websites is PostSecret.  In the creator, Frank Warren's, own words, "PostSecret is an ongoing community art project where people mail in their secrets anonymously on one side of a post card."

In January 2004, Frank (followers know his simply by his first name) started his project. Handing out post cards for people to submit their secrets.  The idea that there would be comfort in the act of sharing something with the world that no one else knows.

From then on, every Sunday, Frank shares 10 secrets on his blog from anywhere and everywhere. Some are funny, some are sad, some are embarrassing and some are soul crushing.  Frank travels the world presenting some of his favorite secrets on college campuses large and small. One of the most poignant was a picture of a door with a hole in it. The author shared that a dad or uncle was drunk and tried to break in.  After he posted that, he received dozens of others.

No matter what you are going through, you are not the only one.

Lighter moments included pictures of his mail carrier...she delivers hundreds of post cards a week, even one on a coconut. Ha.

Most secrets ring true, except for maybe the one last week. A submitted post card insinuated that the author was dumped, and he then dumped her body in a Chicago park.  Reddit jumped on it and it was deemed a hoax by Chicago detectives.

If you have a chance to see Frank live, do it. If for no other reason than to get back in touch with your humanity.

Check out secrets every Sunday here. 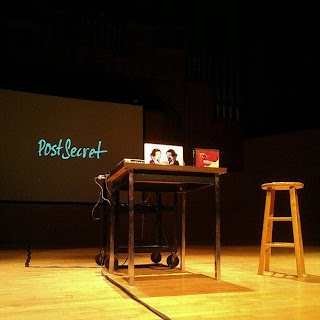 Posted by Cleveland Chick at 3:50 PM