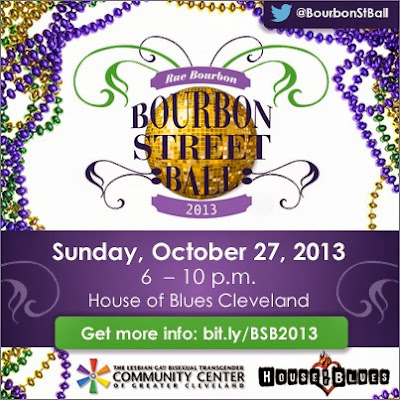 This kiddies, is a fun giveaway.

The Bourbon Street Ball, presented by the LGBT Community Center of Greater Cleveland and the House of Blues Cleveland, is more than some shiny beads.  This event, on October 27, will be hosted by Cleveland 102's Kory in his FINAL Cleveland public appearance (sniffles) and Veranda L'Ni, not only the tallest drag queen in Cleveland, but also the hostess of Drag Bingo.

Entertainment will be provided by comedienne Suzanne Westenhoefer and STOMPer Elec Simon.

This event is not only fun and beadalicious, it is also the largest event for the Lesbian Gay Bisexual Transgender Community of Greater Cleveland. This group's Mission is to advance the rights, respect and diversity of the LGBT community.

I'm giving away a pair of general admission tickets, but if you want to make your plans now, DO IT.

Here are the dets:

Ok, now for the YAYYY!

There are a couple of ways to enter to win tickets, so make sure you leave a separate comment for each method of entry. I let a computer program pick the winner, so if you don't comment, you lose an entry.


You have until Saturday, October 19 at noon to enter. Remember, you can tweet once per day. Let's face it, if you tweet more than that, people will want to hurt both of us, so be cool.

Disclosure: I was given a pair of tix for myself and a pair to giveaway to you fabulous party people. I'm enormously bummed that I will not be able to make this shindig, but you can still go. All the words here are my own and currently fueled by way too much diet coke and a cafe mocha.
Posted by Cleveland Chick at 12:12 PM