I hope you will pardon me for addressing the entire organization. There are so many involved in the decision making of different issues at different times, I didn't want to neglect anyone.

I have always been, first and foremost, a Browns fan. Yes, I have dabbled with other teams -  I rooted for the Chargers when I was 8 because of my unwavering crush on Dan Fouts and when I lived in Indianapolis - following Peyton Manning from Tennessee to Indy - they received some of my attention.

At Lucas Oil Stadium, I was known as the "Cleveland Chick" by some of the NFL Network and Media types. I was working in the same stadium as the SuperBowl Champions, and I was only concerned with the Cleveland score. I tell you this, because you are testing my resolve.

I am fortunate that I have lived through Browns playoff games. I remember what it was like watching the Kardiac Kids. I remember the excitement flowing through the city. Many fans now have no idea what it feels like to win. It truly hurts my heart.

The endless rebuilding. The carousal of quarterbacks and next big things. It is tiring.

We, as fans, all have our own breaking points and I am close to mine.

Sirs, if you puree cauliflower and serve it on an beautifully expensive dish and call it cheesecake, it doesn't make it so.

A ridiculous statement? Maybe. But so are your announcements of rebuilding.  Pleading with fans, insisting on their patience borders on offensive.

I apologize for my bluntness, but each season slowly drains me of my fanaticism. When I see my beloved team and city the butt of jokes - giving the media and the league a laugh - I get angry. And then just tired.

I'm tired of waiting for next year.

I'm tired of talking about the next draft in October.

I'm tired of the broken promises.

As a children, we all had that one favorite toy. The one that we dragged everywhere and cried inconsolably if it was out of our sight. Then, one day, that toy lost its luster. It became less important as our lives moved forward. Eventually, that treasured possession became a memory.

That, sirs, is what the Browns are becoming. No amount of smoke, flames or snazzy DJs can make up for a failing team.

I implore you, please, get it right. Do what it takes to win again. Stop the never-ending carousal of quarterback doom.

Thank you for your time.

Edited to add this: 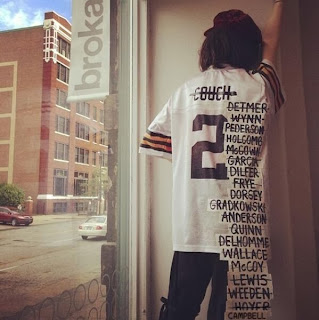 Posted by Cleveland Chick at 1:32 PM