Johnny Manziel - QB for the Browns?

Most talk is about the guy named Johnny Manziel or his registered trademark name - Johnny Football - to you. Manziel is full of flash and dazzle. He has the cocky attitude the likes of which Cleveland football hasn't seen in I can't remember when. He was the first freshman to win the Heisman. The kid has skills, there is no question about that. 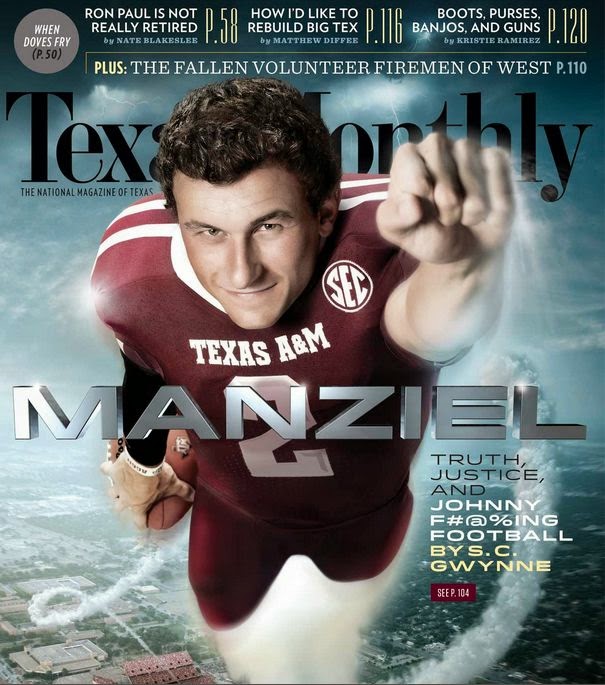 Manziel is a risk taker.  He is exciting to watch.  Watching Manziel reminds me a lot of Brett Favre...both on an off the field. Both at ease on the field...and in front of the camera. That smile and ah shucks charm makes both of them winners with the fans. High risk equals high reward.

But...and you knew this was coming...Manziel, like Favre, enjoys the spotlight a little *too* much. And as with Favre, if he isn't careful, his off field antics are going to tear his little playhouse down.

He is young and immature. In his short college career, he has been arrested, punked out on Peyton Manning's Quarterback Clinic and benched for accepting money for autographs. His W. 6th girls are going to make Grady's Ladies look like a knitting circle.

Maziel is all about the dollar bills y'all and the ladies and the court side tickets.

Yes, before you tweet or comment to me, I understand that he has said he has matured and he gets it now. Yup. I heard it. I just don't believe it. You don't *grow up* in a matter of days. It doesn't work that way. I don't know what he has done that could make me believe that.

If Manziel does have his act together...on and off the field...he can the Browns relevant again. The letter networks just might call us Cleveland and not Lefoolio's old city.

Only time will tell...and if you Browns fans are getting your Johnny Football or The House That Johnny Built tshirt ready to sell in the munilot...remember to give him his cut.

Posted by Cleveland Chick at 1:30 PM