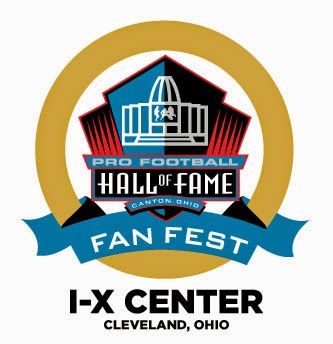 ARE YOU READY FOR SOME FOOTBALL!?!?!

I'm not going to lie. I am so ready for some football.

Here is the listing of events:

Whew. If you are looking for more of a VIP experience you can upgrade your general admission tickets for one of the following experiences:

If that was all TL;DR for you, here is a short video about the event:
Pro Football Hall Of Fame Fan Fest - Spot 2 - 30 from StoneKap on Vimeo.

You can get more information about the event or get tickets by clicking here.
Tickets for each show starts at $39.99 (if you get them in advance) and go up from there.  Remember, autograph tickets are *separate* so get those NOW. I'm going to start raking leaves in my neighborhood to get an autograph ticket for the Jim Brown session. Each session has over 20 Hall of Famers, with no turkeys in the bunch. Woof.
If you are going this weekend, make sure your phone is charged and tweet away using the hashtags #FanFestHOF and #ThisisCLE. Make your friends jealous. I will be there and I know that is my goal.
Now my friends, is the part that you have been waiting for.
The awesome people at the I-X Center and the Pro Football Hall of Fame have given me a pair of general admission tickets to give away!
There are a couple of ways to enter to win, so make sure you leave a separate comment for each method of entry. I let a computer pick the winner, so if you don't comment, you lose an entry.

Boo for you if you don't follow directions. I'm serious. Don't lose out because this is awesome.


You have until Thursday, May 1 at 7 pm to enter.  Start tweeting!

Disclosure: The awesome peeps at the I-X Center asked me if I wanted to share with you information about this event and I almost passed out with excitement. They offered a pair of general admission tickets for me and a pair for me to giveaway to one of you woof-tastic readers. I will be there with my pop, so feel free to say hi.

Posted by Cleveland Chick at 3:18 PM