Every Christmas Eve, I have an intense, blinding flashback of my first job.

My first gig was at Marc's in Southland, and if you have never been there, picture the largest garage sale on Earth.  Weird chotchkies and cookies labeled in Korean mixed in with everyday items were common place.

Marc's was the perfect place for teen me. The weekend and evening staff was nothing but high school kids, and not a single one was from my hometown.  Keep in mind, this was before cell phones and Facebook. The internet was something your Uncle Fred set up after one too many Miller High Lifes to catch an unsuspecting rodent in the basement.

It was a weirdly wonderful place, with Marc's mom as my boss. She walked around the store and collected money at the end of the night with birds. Yes, birds. I hated those damn birds. Calling them birds isn't a fair description. Feathered pitbulls with beaks of ninjas is more accurate. If you came near her or the money, they would squawk and peck at you, always going for your eyes.

Aside from Back To School season, Christmas Eve was the most awful time to work. There was no online shopping, so you had to actually go out into the world to purchase gifts. No gift cards - honest to goodness presents.

This particular Christmas Eve of my nightmares was especially cold and dreary. When we arrived to work, the parking lot was already full of people waiting to get in. The customers were a mix of last minute frantic shoppers trying to get a bargain on Liz Claiborne Eau de Toilette or lonely people with no plans other than to look for a bargain on aluminum foil.

After a few hours of frantic cash register ringing, I started to feel woozy. Everyone complained about the smell. We all had headaches. There was a gas leak in the store and the managers ran up and down the aisles announcing we had to evacuate immediately. One of the guys was driving the fork lift in the warehouse with the forks up and punctured a gas line. Oopsie.

Some people ran out of the store, yelling and shouting like they were being chased by the 4th horseman of the apocalypse. We had to forcibly remove other people because they refused to leave empty handed.  They wanted that Prince BatDance cassingle.

After we emptied the store, we all went to the Arby's parking lot and waited. And waited. We couldn't go home and had to go back to work once it was safe. Word was passed around that anyone that didn't come back would be fired.

When we returned to the store, there were still people in the parking lot. Some folks had never left. Those people were angry, cold, hangry and angry. So very, very angry.

High from gas fumes, we ran around the store for an hour, trying to put away all the items people left all over the store. The place was a disaster area, between panicked customers and emergency personnel. Once we opened the doors, people ran in like it was a race. Some people were grateful. Some swore that we ruined Christmas.

Some came in looking for a chicken pot pie for dinner.

Working retail, you gain a keen understanding of people. You see the good and the cranky. If there was one thing that I learned from that job, it was the concept that there are not little elves that stock the shelves or make my dinner. Lots of people work hard to make my life easier.

I also learned that if you tell someone that the 25 dog bones that she grabbed were 25 for $1 and not 25 for 99 cents, she might throw each one at your head. 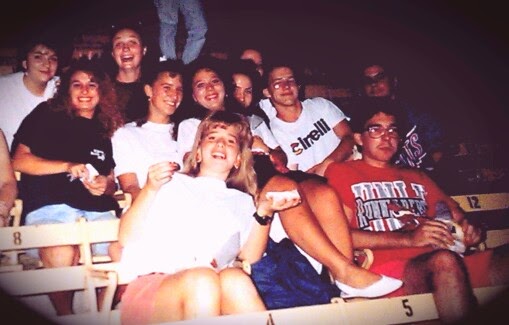 Posted by Cleveland Chick at 7:32 PM No comments: