5 Questions Answered by Someone Awesome - Party At Napoli's 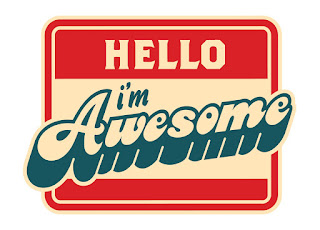 What makes someone awesome?

Lots of things is the simple answer. A person's attitude, accomplishments, the indescribable aura around them are all possible qualities that make a person awesome.

More often though, it is something small; a gesture or a moment that goes from mundane to amazing because it struck a chord with someone else. Maybe it was calling a long forgotten friend to just say hi, or maybe it was making a sign at a ball game. I'll get to the latter in a moment.

5 Questions with Someone Awesome is my continuing adventure to find people that I think are awesome, telling them that they are awesome and trying to find out why they are so awesome.

You can read my original blog post about the idea here. So far, I have asked questions of Scott Wise - the Scotty in Scotty's Brewhouse, Rik Danburg from your Cleveland Indians, past Browns Kicker, Billy Cundiff , my BFF author, David Collins and Sarah Stilgenbauer, previous co-worker and all around adventurer.

What makes this shirt different from any other in the crowd is that the proceeds from this one go to Cleveland Clinic Children's Hospital. The shirt has raised close to $100,000 and we can all agree, that is pretty awesome.

If you want one for yourself, you can stop by the Indians Team Shop or online.

Nate, is in his words:

A life-long resident of Northeast Ohio who really is married to the woman of his dreams with three great children.  I enjoy what I do for a living: anything I dislike about it disappears bi-weekly on Fridays and on the weekends.  I may or may not drive a minivan but all that matters to me is how I feel about it.  I’m okay with admitting when I’m wrong because it’s plenty fun that I’m right.

5 Questions with Nate (or Hipster Tito for tweeps)

1. I know you through social media and seeing you and your signs at the ballpark. Some folks may not know that you are the guy behind the funny signs, including "Party at Napoli's" at Indians games. Why do you think that sign caught on and when did Mike Napoli see it?

I think Party at Napoli’s caught on because of two things: timing and being starved for something fun to hang on to.  It was a fun inside joke amongst friends at the start of the season and it would get chuckles from random strangers when I would bring the sign to games.  It would get a few mentions on Twitter and we’d have some talk back and forth on Twitter every time Mike Napoli did something at the plate.  Like a number of great things in our city, it really picked up steam in June with the Tribe playing incredible and the Cavs bring home a title.  It became a lot of fun to hear it from people in passing everywhere I went, always followed by high-fives and laughter.  Everyone was in the best of moods for what seemed to be an eternity in June.  That vibe was something we’ve needed for a long, long time.

According to the players that I’ve since had a chance to talk to, they noticed it in the dugout during the first night in April that I brought the sign.  When I had a chance to meet Mike, a few players came by to say hi: “Hey, that was YOU!?  We laughed about that the whole game.”

2. Speaking of Party at Napoli's, those t-shirts with "Party at Napoli's" across them have raised almost $100,000 for Cleveland Clinic Children's Hospitals. How did the shirts come to be?

I made a shirt using iron-on letters from Hobby Lobby and an $8 shirt from Target with the original intention of just wearing it to a few games similar to what I’ve done in previous years (I’ve since given the shirt away to an acquaintance/friend as kind of a thankful hat tip).  Figuring in the past these one-off shirts were funny to certain “subject matters”, I made one for Mike and asked the Indians for a favor to drop it off for him.  Mike loved it and we started the conversation about mass-producing with a key contingency being charity as a beneficiary.

3. I remember early conversations about the t-shirt idea, and the discussion was not about making a buck for yourself, but raising money for charity, which is awesome. What has the response been from the philanthropy side, and is there a "Weekend at Frankie's" shirt next in the series?

It’s pretty amazing to sit back and let it sink in that people rallied around a three-word phrase to raise money for a charity.  Sure, it’s a cool shirt and sure, it’s about one of the best feel-good, party-hard players in the game but… WOW.  I don’t know how better to describe that feeling.  Philanthropy is a such a cool thing.  Compassion, generosity, benevolence.  You can’t deny how powerful that can be.

It doesn’t take much to find all of the negativity and hate in today’s world.  Just scroll through your social media timelines and you are assured to find something hateful, spiteful, vengeful and other characteristics of a world that has lost its mind.  We tend to just accept it without understanding the impact this has on our everyday lives.  It’s etched so deep into our minds that we just accept it and continue that cycle.  Sure: it’s life.  Life will kick you with indifference while you’re down.  It doesn’t matter if you’ve had “enough”, it can be void of “mercy”.

Keeping that in perspective, one of the most “unfair” byproducts of life can be the health and well-being of others including children.  There are diseases and complications that are so relentless and aggressive with an assumed ease that bring so many to their last breath, some even before they’ve had a chance to have their first and second breaths.  That can be such as hopeless and crushing feeling.

When there is a chance to help people in these situations, I have yet to meet someone in my life that will pass up that opportunity.  Maybe I’m a little sheltered in that mindset, but deep down, everyone feels that they are doing the “right” thing: that their pursuits are of the best of intentions.  When you see others pursuing the ability to help others or even seeking help themselves, your mind can naturally tug you in the direction of joining in.

Here we are $100,000 later and still rolling along.  I really hope it makes a difference for someone.

In terms of what's next, I've actually been asked that a lot.  I've been sitting back and enjoying the ride.  I'd like to come up with something again, working with the folks at 108 Stitches has been quite an experience: great folks.  Weekend at Frankie's would be cool!

I’m lucky enough to have incredible people in my life.  I can think of an unlimited amount of advice that they’ve given me throughout my life: some I took to immediately, some put on hold for a time I needed it most.  I figure if they took the time to tell me something that mattered to them (even if I didn’t agree with it), that they were investing in me and I needed to return in due time.

I’ll pick one from recent events: I have a mentor that said to me that things in life, work, etc. are all manipulated by momentum.  People and events feed off momentum.  “Success breeds success.”  I can think of millions of times in the past where I could have used that insight and missed the opportunity.

In terms of advice that I wish I received, possibly a reminder to look forward and not back as much as I have a tendency to do in certain situations.


5. Last question, who do you think is awesome and why?

That’s actually a pretty loaded question without a right or wrong answer.  From people close to me to people that I’m not directly acquainted with, there’s so many people I can think of that are awesome in their own way.  How persistent my wife can be, how balanced my friends are, how rewarding my kids can make me feel, how strong my grandparents were, how willing strangers can be to open themselves up and obviously how giving people as a whole can be.

Posted by Cleveland Chick at 2:17 PM No comments: